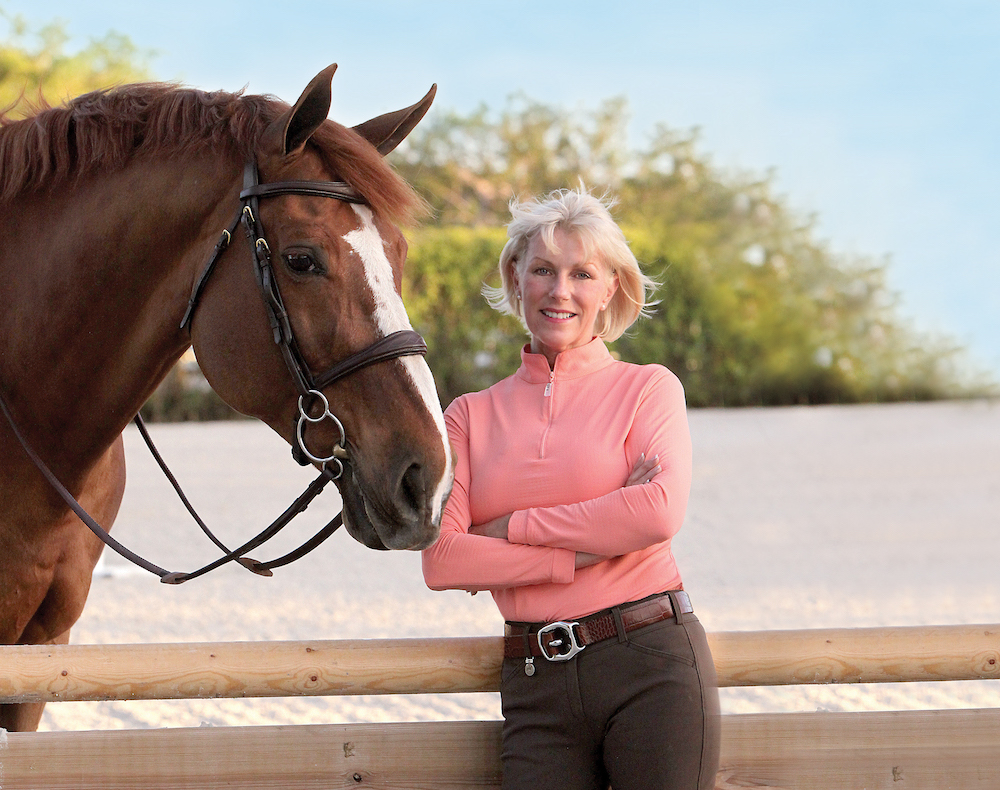 Jackie Eckert, the founder and owner of Equi In Style, calls herself a late bloomer. She speaks fondly of her days as a flight attendant in the 70s – the heyday of air travel aboard state-of-the-art Eastern Airlines jets. “That was my college degree right there,” she says. After spending her youth and much of her young adulthood traveling, both as a part of a military family and as a flight attendant, Jackie now focuses her worldly college skills on another of her passions: equestrian sport.

“Growing up in an Air Force family and changing schools all the time was tough,” Jackie recalls. “But being dropped off at the barn to spend time with my horse was heaven to me, so that’s why I spent a lot of time there.”

A stalwart believer in the old Churchill saying, “the outside of a horse is good for the inside of a man”, Jackie draws her inspiration today from those who share her love of the horse. After all, two of the biggest influences in her life are equine – her two horses, Sassy and Ranger Z.

Today, Jackie, whose sense of personal style is a classical nod to her days with Eastern Airlines, owns the company who originally released the COOL Shirt®, designed to protect riders from harmful UV rays and heat. Equi In Style’s products are all manufactured in the U.S., another proud point for Jackie and her military roots.

Building a company from the ground up, in a niche industry, is far from simple, Jackie says – and she’s had to learn much through trial and error. “Knowing when to say ‘no’ is probably one of the most difficult lessons I’ve had to learn,” Jackie says. “There comes a time when you have to put on your big girl pants and say ‘this isn’t working’. It’s not good for your business to take on too much or to not have that line.”

And working within a retail industry that has seen many of its brick and mortar offerings close their doors presents its own set of challenges, too. In the age of online shopping and instant gratification – where does equestrian retail fit in?

“The boutiques have certainly had to change over time,” Jackie explains. “It used to be, you went into a tack shop and you sat in this big chair and you got kitted out head to toe. And you’d see your friends and just almost make a day of it. And while there are still a few shops where you feel that experience, you’re seeing a lot of these stores change in order to keep up with the online shoppers.”

But there is a fine line to walk as a manufacturer: how do you capitalize on the voracious appetites of horse crazy shoppers who would rather shop from their phone than go to the tack store without lowering the already-dwindling foot traffic of your storefront partners?

“While I want to be a part of the online draw – which is why we have an in-house marketing and social media team – I very much respect our retail partners,” Jackie explains. “For that reason, our customization offerings have really taken off. What we’re seeing is that tack stores want to create their own EIS shirts to sell. It’s something the stores are identifying with and that they want to sell.”

And it’s that connection with her retail partners that Jackie holds in such high esteem. “Those shops have really come to love our product because they make it their own,” she said. “That’s what people want – something that is their own.”

While the ever-changing environment of retail sales is one that requires an open mind, Jackie has found a healthy balance in her work. “Creativity comes from having a constant flow,” she says. “I draw my motivation from those around me and the people who buy EIS shirts. You can’t have inspiration without that motivation. I can walk out of my office and see someone at a show with one of my shirts on, and it still blows me away.”